News and Stories from the U.S.

Read the stories of faithful Catholics in the seven sectors across the U.S. that embody the spirit of Laudato Si’ to make a difference as a part of God’s plan(et).

Do you have a story to share? Submit your creation care story here to be featured and to inspire others!

For more than 90 years, the Washington Retreat House has offered citizens of the capital a respite from the city’s clanging political culture, a few quiet acres set aside for “refreshment for the soul and rest of the body,” in the words of its founder, Mother Lurana White.

The Retreat House now hopes to be known as something else as well: a hub of eco-consciousness. Owned and operated by the Franciscan Sisters of the Atonement, the house has installed solar panels on the roof, planted 17 trees, set up two rain barrels, switched to LED lighting and energy-star appliances and are moving away from single-use plastic utensils and service wear.

“We have committed ourselves as a retreat house to change our consciousness to be more earth friendly and to protect the environment,” said Sister Sara Dwyer, the house’s director.

Dwyer is a religious sister in the Adorers of the Blood of Christ and was active in their battle against a natural gas pipeline in Pennsylvania. “Just being in resistance is not the goal,” Dwyer told The New Yorker magazine about that conflict. “The goal is spiritual conversion.”

A similar impulse guides Dwyer’s work at the Retreat House, which she said will use a new grant from the Victory Noll Sisters Small Grant program to buy posters and other educational resources, including God’s Plan(et) prayer cards and 30 copies of Laudato Si’, Pope Francis’ environmental encyclical, to share with guests.

The Retreat House occupies five acres in a corner of the district dotted by church institutions, including the Catholic University of America, the Basilica of the National Shrine of the Immaculate Conception, Ukrainian Catholic National Shrine and St. John Paul II Seminary. 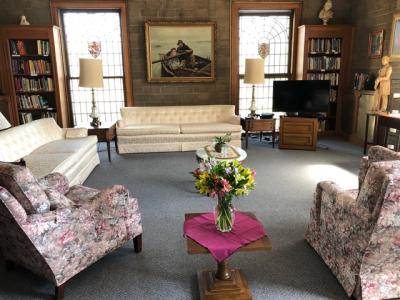 Though run by Catholic sisters and serving the Catholic community, the Retreat House welcomes people from a variety of backgrounds who seek a deeper connection to God, and hosts social justice organizations from a number of spiritual and civic traditions.

The Retreat House is one of many properties run by women religious participating in the Laudato Si’ Action Platform, a Vatican-led global initiative that asks Catholic institutions to commit to a seven-year plan toward environmental sustainability. “In a seven-year project, every baby step we take is a step in the right direction,” Dwyer said.

“We are international, so we know that our (American) lifestyle is not sustainable,” Dwyer said, explaining why so many women religious are engaged in environmental activism. “What we are doing is having an effect on our sisters in other countries around the world. It’s realizing how unconscious and arrogant we are about our lifestyles.”

In DC, the sister said she hopes the green vibe rubs off on Retreat House guests. “Hopefully the people who come here will catch on to something about how we try to limit our carbon footprint,” Dwyer said. “It’s not something like checking a box. It’s changing the way you live.”

Check out a short video from the recent launching of the Laudato Si' Action Platform at the Immaculate Conception Church and its parochial school! The video incudes a clip from Durham Walks for Climate event organized by the parish on the last day of the Climate Summit in Glasgow. 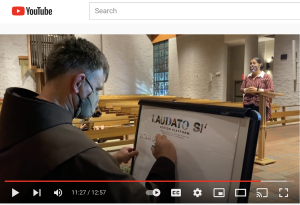 As part of their LS' Action Platform commitment, the parish and school are developing a working relationship with the Half-Earth Project. With its headquarters in Durham, less than a mile from our campus, the Half-Earth projects focuses on protecting the hotspots of biodiversity on our planet.

Once upon a time, Kaeley Einheuser would have been the last person to approach a beehive.

But then St. Joseph’s Academy in St. Augustine, Florida, where Einheuser is a senior, hosted a local beekeeper during Earth Week last year.

After learning about the big role tiny bees play as pollinators in the Earth’s ecosystem, she became an ardent, um, bee-liever.

“I used to be really scared of bees,” Einheuser said. “I would totally freak out. Now, I want to save them.” 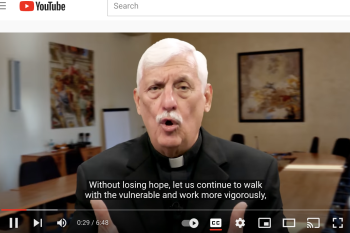 In this video, Fr. Arturo Sosa, the Superior General of the Society of Jesus "extends an earnest invitation to all to join the process of the Laudato Si' Action Platform, to deepen our ecological conversion, to continue to integrate the objectives of Laudato Si' into our lives and apostolates, to take concrete and bold action to address the crisis affecting our common home as a dimension of our mission of reconciliation and justice that seeks to restore balance with the environment and to dismantle structures of injustice in order to re-establish our relationship with God."

Catholic sisters living in a convent in northeast Washington, D.C., used to look out their windows at a big, empty field. Now they gaze out at a solar farm that, in spring, will have flowers blooming between the panels.

The convent sits on 14 acres of land owned by Catholic Charities of the Archdiocese of Washington. A few years ago, the group decided to use that property to make clean energy.

A five-acre solar installation now generates enough power to offset the electricity used at the group’s 12 buildings across D.C.

“So it’s driving substantial energy cost reductions to the tune of well over $300,000 a year,” says Page Gravely, president of Mission Energy.

Families, here’s what you need to enroll in the Laudato Si’ Action Platform

So you’ve decided to enroll your family in the Laudato Si’ Action Platform (LSAP/”the Platform.”) That’s a fantastic way to show your family’s commitment to protecting God’s Creation at this especially urgent moment. So, first of all, thank you!

Over 10,000 high school youth, priests, youth ministers, and chaperones descended on downtown Indianapolis, Indiana for the National Catholic Youth Conference 2021 (NCYC). Despite the limited number of attendees due to COVID-19 precautions, the Service Area of the “Village” was crawling with teens eager to spend some time putting their faith into action.

Members of the ArchIndy Creation Care Commission set up shop in the Village to teach participants how to “plarn” mats to give to people in Indianapolis experiencing homelessness.

Those who came through the booth were encouraged to explore how we can hear both the cry of the earth and the cry of the poor through the lens of our Catholic faith. The plarning project demonstrated one concrete example of this through using recycled bags, creating something that is for those in need.

Nobody likes to count the pounds around Thanksgiving, but at St. Pius X and St. Mary of the Assumption Pastorate in Baltimore, Maryland, it can actually be inspiring.

Volunteers in the pastorate’s Giving Garden ministry harvested and delivered 1,150 pounds of fresh fruits and vegetables to a local food bank in 2021, thanks in part to a grant from Catholic Climate Covenant. Their 2021 harvest was nearly double that of 2019 -- talk about your green thumbs!

The California Conference of Catholic Bishops is joining Pope Francis in the launch of the Laudato Si' Action Platform (LSAP), which kicked off on November 14.

The LSAP is a list of seven goals that the Holy Father has outlined to help spur a worldwide grassroots effort to mobilize Catholics to take action on the environment over a period of seven years.

California parishes on Nov. 14 included liturgical messages on how we all can seek out opportunities to reflect on the call to be good stewards as outlined in the Bishops' pastoral statement God Calls Us All to Care for our Common Home, as well as Pope Francis' encyclical Laudato Si.'

"If I hadn’t picked up the one"

Today Marie Constantin is a founding member of the Louisiana Stormwater Coalition (www.louisianastormwater.com) along with Dr. Jeff Kuehney, Renee Verma and Kelly Hurtado. The four of them run a grassroots effort to increase awareness about the benefits of permanently funding stormwater management programs as a way of combating flooding and litter issues.

We are living in a pivotal moment. This new decade has been characterized by tragedy and tension, from the global pandemic to nationwide social upheaval. At the same time, our collective experience has taught us lessons sure to spark critically needed change for years to come. Among the issues justly elevated in our political and public health discourse is health equity, or the inherent right we all have to reach our full health potential, regardless of our social status or circumstances.