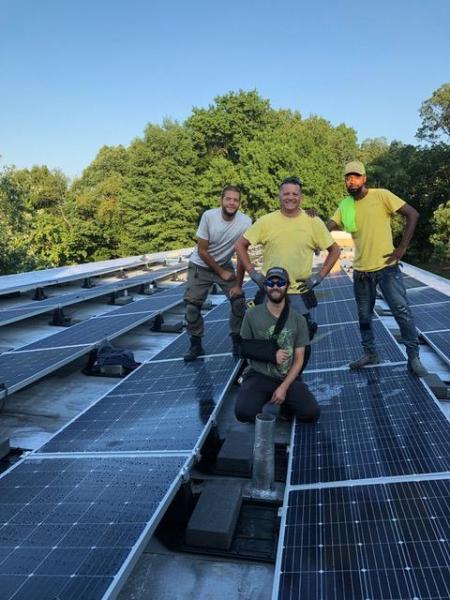 For more than 90 years, the Washington Retreat House has offered citizens of the capital a respite from the city’s clanging political culture, a few quiet acres set aside for “refreshment for the soul and rest of the body,” in the words of its founder, Mother Lurana White.

The Retreat House now hopes to be known as something else as well: a hub of eco-consciousness. Owned and operated by the Franciscan Sisters of the Atonement, the house has installed solar panels on the roof, planted 17 trees, set up two rain barrels, switched to LED lighting and energy-star appliances and are moving away from single-use plastic utensils and service wear.

“We have committed ourselves as a retreat house to change our consciousness to be more earth friendly and to protect the environment,” said Sister Sara Dwyer, the house’s director.

Dwyer is a religious sister in the Adorers of the Blood of Christ and was active in their battle against a natural gas pipeline in Pennsylvania. “Just being in resistance is not the goal,” Dwyer told The New Yorker magazine about that conflict. “The goal is spiritual conversion.”

A similar impulse guides Dwyer’s work at the Retreat House, which she said will use a new grant from the Victory Noll Sisters Small Grant program to buy posters and other educational resources, including God’s Plan(et) prayer cards and 30 copies of Laudato Si’, Pope Francis’ environmental encyclical, to share with guests.

The Retreat House occupies five acres in a corner of the district dotted by church institutions, including the Catholic University of America, the Basilica of the National Shrine of the Immaculate Conception, Ukrainian Catholic National Shrine and St. John Paul II Seminary.

Though run by Catholic sisters and serving the Catholic community, the Retreat House welcomes people from a variety of backgrounds who seek a deeper connection to God, and hosts social justice organizations from a number of spiritual and civic traditions.

The Retreat House is one of many properties run by women religious participating in the Laudato Si’ Action Platform, a Vatican-led global initiative that asks Catholic institutions to commit to a seven-year plan toward environmental sustainability. “In a seven-year project, every baby step we take is a step in the right direction,” Dwyer said.

“We are international, so we know that our (American) lifestyle is not sustainable,” Dwyer said, explaining why so many women religious are engaged in environmental activism. “What we are doing is having an effect on our sisters in other countries around the world. It’s realizing how unconscious and arrogant we are about our lifestyles.”

In DC, the sister said she hopes the green vibe rubs off on Retreat House guests. “Hopefully the people who come here will catch on to something about how we try to limit our carbon footprint,” Dwyer said. “It’s not something like checking a box. It’s changing the way you live.”