When Hollywood actor and stuntman Hilton Kelley visited his hometown of Port Arthur, Texas, in 2000 after 20 years away, he was taken aback by how much the Gulf Coast community had deteriorated since his youth. In the city's socioeconomically depressed west side especially, businesses and services had closed, kids were playing in parks near gang strongholds, and an alarming number of people were ill with chronic disease. 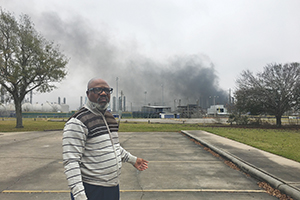 Environmental activist Hilton Kelley is seen in front of the TPC Group chemical plant near Port Arthur, Texas. Multiple explosions at the plant in November 2019 caused injuries to nearby residents, damaged property and necessitated a mandatory evacuation around a 4-mile radius that included Port Neches, Groves, Nederland and part of Port Arthur.

He said that a source of much of the decline — particularly when it came to the health of west side community members — was the close proximity to petrochemical and other heavy industrial companies. The emissions the facilities spew into the air were causing respiratory problems and skin irritation. Kelley also believes the toxins increase the incidence of certain cancers, heart disease and lung disease, but to his knowledge research has not been conducted to establish causality.

Kelley said he moved back to Port Arthur to defend the community against environmental injustice and to work to promote the health and well-being of its citizens. He's spent two decades engaging the community in tracking the companies' emission events, urging regulatory involvement and initiating legal action. At the same time, he and an organization he founded and still runs have been investing in community revitalization.

"I think it's up to all of us to do what we can to save the children, save the babies, save our elderly. And to help make this world a better place for everyone," Kelley said during a March 16 webinar sponsored by CHA and the Catholic Climate Covenant